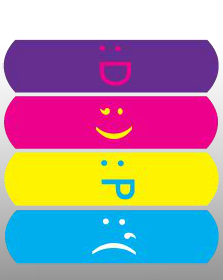 “Today’s #HalloWatch comes from Joshua Coleman who sent us this snapshot of “Boo Boo Monsters” Sterile Adhesive Bandages which he uncovered at Walmart. Think you’re too old for boo boos? Think again! These suckers glow-in-the-dark and if that’s not enough to convince you they’re cool then, uh – well, it’s like I don’t even know you anymore. Now if you’ll excuse me I’m going to cover myself in Boo Boo Monsters and ACE bandages and pretend I’m a radioactive mummy.”

“Moving to the US and first aid products, Total Resources has launched its Txtpressions Sterile Adhesive Bandages, which feature colorful designs based on the language and emoticons of text messaging. The plasters include a blue colored “sad face” design, a pink-colored “winking face” design, and other patterns based on the acronyms “LOL” (laugh out loud) and “SMH” (shaking my head). This use of “text speak” could be an attempt to reach out to the tweens market, which is not frequently targeted by manufacturers of healthcare products.”